In Britain people associate me with railways, most particularly waving my red petticoat to avert a derailment in Lionel Jeffries’ lovely, quintessentially English film of Edith Nesbit’s story The Railway Children. In Nesbit’s day people enjoyed travelling by train, the railways in Britain worked comfortably and efficiently and they looked like the transport of the future.

Cars originally arrived on the scene as a plaything: a noisy machine to take you out into the country. In town someone walked in front of you with a flag. Towns and cities were not designed for automobiles. What went wrong? Why did we not object the moment we saw cars parked on the streets?

Why was I so keen to have a driving licence and buy my first mini? I must have bought into the idea that only a car could give me the sort of freedom I needed to travel wherever I wished to go at any time. Quite simply I gave up on public transport and no longer made any demands on trains, trams or buses to get me where I wanted to go. In 1970 there was seldom any congestion and parking was no problem. 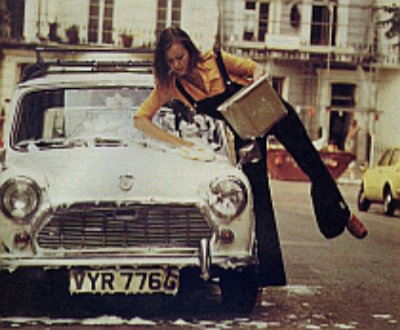 At the age of 21 I moved to Los Angeles, a city created for the car. The railways had been abandoned as soon as this wondrous gas guzzler had been introduced. The freeways had been created to link the suburbs that made up the city. Seventeen years later they seemed more like parking lots than freeways.

Back in London today, I cannot bear to drive in the city. The aggression is catching, the frustration of sitting in traffic is too much for me and I do not enjoy the game of trying to find a parking space. I use public transport to go to most places and resort to a taxi if I need to be on time. And yes, I enjoy travelling by rail and still feel trains could be the transport of the future.

When I abandoned supporting public transport and started tootling around in my little mini I did not realise what the car culture would bring us – had I known I would have been waving my red petticoat to raise the alarm. Now of course it is impossible not to be aware of the mess we are in, and if major changes are not made soon our cities will come to a grinding halt. Why don’t we stop cars driving in the centre of the city? Why don’t we have Home Zones in all residential areas? Why is flying practically anywhere within Europe cheaper than the train journey?

My dream remains that trains, trams and buses should become reliable and affordable. I think that since so much of our time is spent travelling it should be enjoyable too.

Am I waving or drowning?